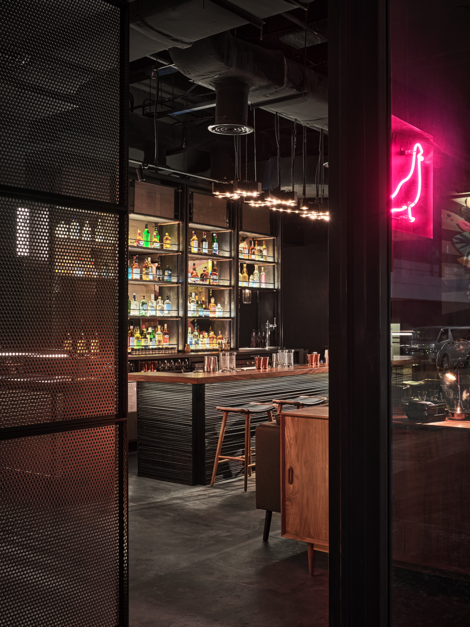 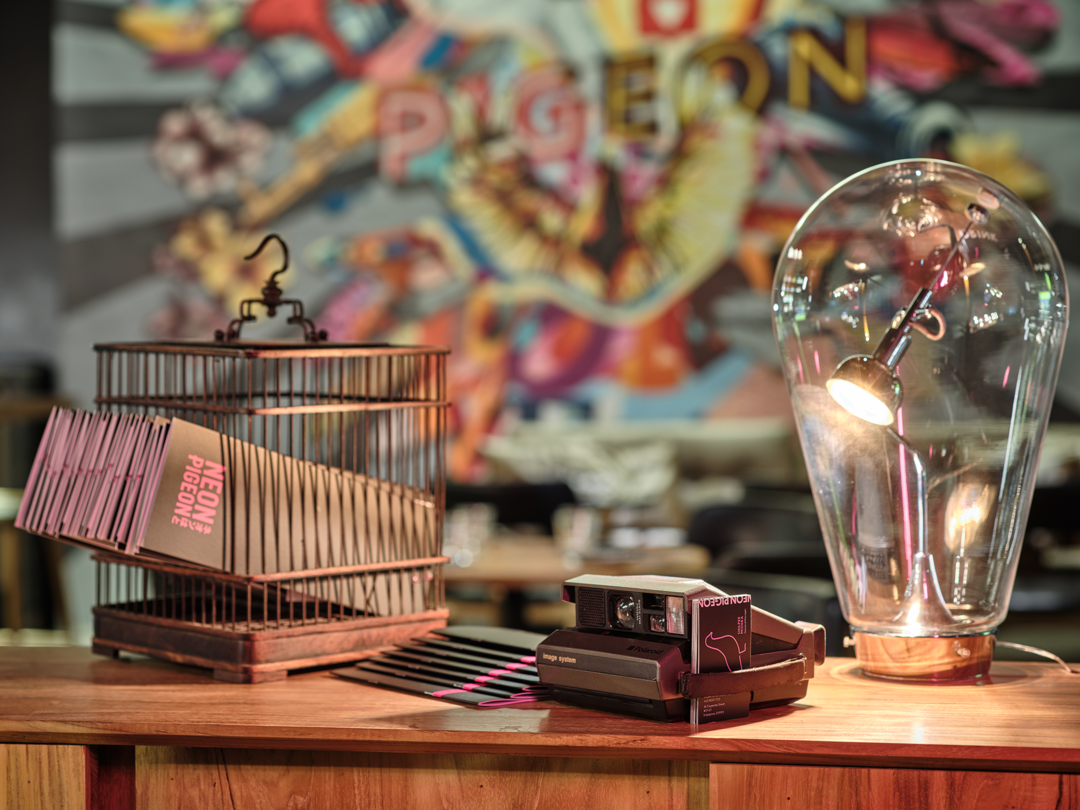 Neon Pigeon 2.0 at Carpenter Street is a revamped, refreshed reincarnation of the much-loved brand. Channelling the same urban grit and energy as the first version, EDG Design injected an extra layer of character in every element that makes up Neon Pigeon’s DNA. Evoking a revolutionary evolution, the modern urban izakaya is a love letter to the addictive buzz of Tokyo’s hidden alleys.

Bringing the community back together

EDG’s vision was to recreate the urban atmosphere evoked in the first venue, while building on it by adding new layers and elevating the design. The new venue is housed in a modern building with 4.8m high ceilings and is much larger than the previous venue; the team worked with the additional space to create a spacious, elevated experience.

The Rebar bar, made of recycled rebar from Singapore construction sites, stands as the centrepiece of the room, and divides the room into zones. Guests can sit at the bar or stand around the high table before proceeding to their table.

The all-new raw bar celebrates an ever-changing selection of beautiful, seasonal ingredients in the form of crudos, tatakis, carpaccios and ceviches. Designed to be interactive with counter seating and communal table adjacent to it, guests can sit and watch the chef preparing dishes.

Pulsing with a gritty interpretation of urban New York meets Tokyo’s underbelly, the space channels all the notes of a coveted den in the city. From the exterior, guests are greeted with the glowing Back Bar adorned with colourful liquor bottles and a suspended “Neon Pigeon” sign in Japanese text, made with many small bulbs. The Back Bar also features vertical shelves made out of oxidized perforated metal and concealed light to create a beacon, the glow of which can be seen from outside.

Graffiti is a key element of Neon Pigeon’s DNA; EDG highlighted three walls throughout the establishment. At the entrance, a large piece of graffiti by Singapore’s famed artists Zero is a parody of Tristan Eaton’s “Let loose the doves of war”.

We look at a brand new project by Singapore-based EDG Design reviving the previously closed down Neon Pigeon restaurant.

Let Loose the Pigeons of Love! 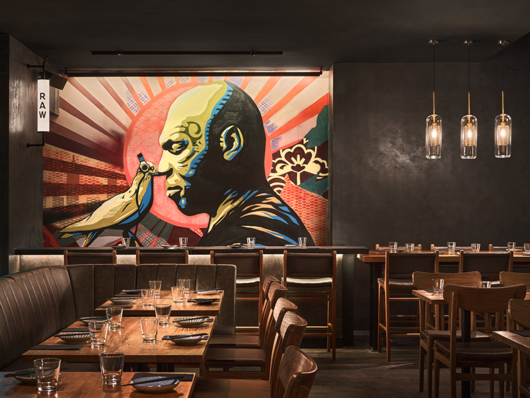 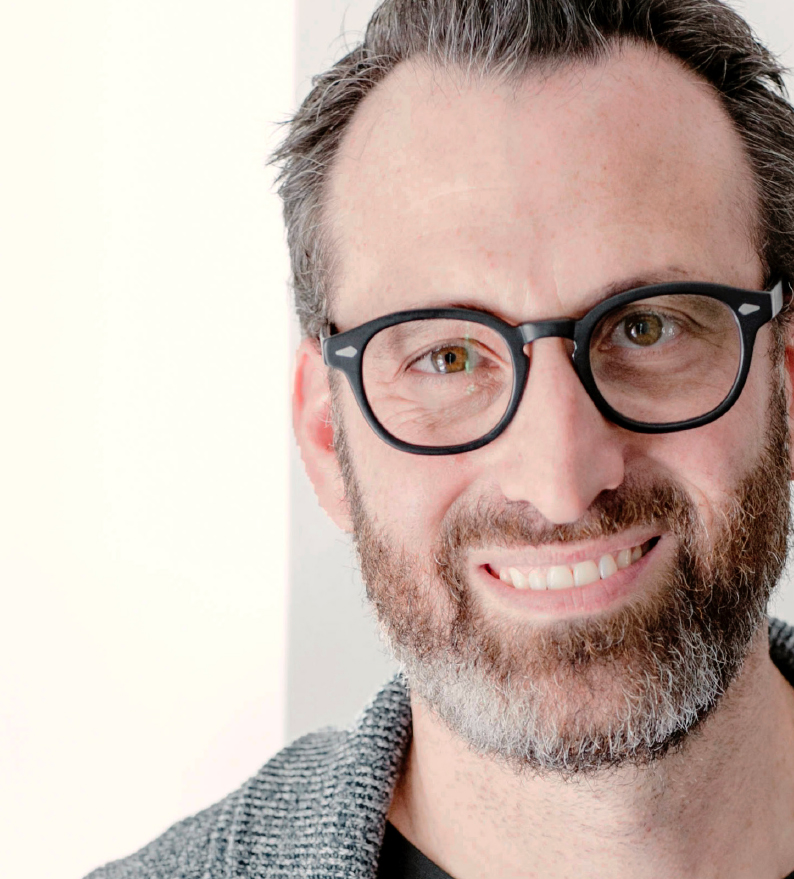 Eaton’s piece is full of strife and struggle, while Zero’s piece, called “Let loose the pigeons of love” pays homage to Eaton’s direction but does so with a more playful approach that ties into Neon Pigeon’s mantra of “Unity love and fun”.

The opposite wall, entitled Roll Call, where Zero rebrands iconic films with pigeon personification. Roll call takes elements of pop culture from Pulp Fiction to Say Anything and puts them into the Tokyo Pigeon context.

Adding on to the electic mural art, the interiors feature perforated metal in a copper finish, with the uniform pattern brings a touch of elegance. Concrete is also a dominant aesthetic of the space, with the team using Dulux concrete effect paint for the wall, a stained and polished concrete floor, and poured concrete countertops at the Raw Bar and kitchen.

A few key signs guide the consumer through the space and add a design layer to the operations; the kitchen will be labelled “EAT”, the bar “DRINK”, the Raw Bar “RAW” and the toilets “DROP”. Additionally, the EDG team led the graphic design with the Design Hungry team, developing details including the refreshed logo and the cocktail menu which reads like a manga comic book.

Michael Goodman has a unique set of qualifications as a Restaurant Owner, Interior Designer, Brand Strategist as well as being a former Executive Chef.

With nearly 20 years of food and beverage experience in both operations and design, Michael approaches projects from a unique angle. He brings a strong culinary and operational focus to all of EDG’s work. In his capacity as a concept designer and strategist, he has developed cutting edge F&B concepts for numerous hotel brands throughout Asia.

As a veteran Hotelier and Chef with Amanresorts, The Liberty Hotel, and Michelin-starred restaurants to name a few, Michael opened and led successful hotels and restaurants in Asia, the Middle East, and the United States. He is a driving force in hospitality concepts in India, China, and Southeast Asia, successfully integrating food and beverage concepts into public spaces and back of house.

Michael has lived in Asia and the Middle East for the better part of 18 years, calling Bali, Dubai, and Singapore home. Having lived in Singapore for most of the last five years, he has a thorough understanding of the market and differing clientele in the city.